Why Some Kids Have Trouble Learning Math, and How Teachers Can Address It

Math disabilities are one of the most prevalent and critical issues in our school systems. Because math and science are now the central subjects in school curriculums, affected students are struggling to pass onto the next level of their education. Even very bright students may have mathematical difficulties that prevent them from reaching their potential. In order to address this issue, teachers must first understand why these students are struggling and formulate a strategy suitable for the student’s needs.

Math disabilities may arise from several different factors. Older students are often held back by incomplete mastery of basic number computations. For example, they may not have a solid foundation in elementary-level addition, subtraction, multiplication, and division. They may also incorrectly carry numbers, use the wrong columns, or misread signs. Basic errors prevent them from successfully completing higher level mathematics even if they do have the capacity to understand complex mathematical concepts.

If a child has a problem with math, often the problem is exacerbated and made worse instead of being improved. Respect and appreciate the fact that for some people math is difficult to grasp. So instead of dumbing it down and treating them as if they’re stupid, convey math to them in a language they understand. If this doesn’t happen they are going to develop a chip on their shoulder when it comes to math, switch off and just not care for it. A child who does this at 6-7 will quickly become a teenager of 13-14 who has lost the most critical seven years of their educational development.

The irony of all this is that there could be children out there who have a skill for math but will never know it because they turned their back on it at such an early age. 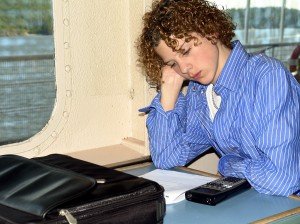 Students with poor fundamental math skills are often quite obvious to teachers who check to see exactly where the error(s) were made. Such students may appear to have a grasp on the concept being taught, yet they still wind up with wrong final answers. In order to address this concern, teachers may need to direct these students back to the basics. Preparing a worksheet with computations that the student seems to struggle with is a good route. Fundamental math skills are acquired through repetition and memorization, so assigning the same few worksheets over the span of a few months is fine.

Another very disabling issue among all grade levels is poor language skills. Often these students experience difficulties with reading comprehension. They may do fine with numerical computations, but falter with word problems. Often, mathematical word problems will offer irrelevant information in addition to what is necessary for solving the problem. These students often struggle to differentiate between the two. They may also struggle to grasp mathematical language, especially terminology that they are not used to hearing outside of the classroom.

Teachers will often notice these students solving difficult numerical calculations, yet struggling with fairly easy word problems. Some of these students are already in remedial language arts programs, whereas others may only struggle with mathematical word problems. For these students, the CUBE method may work best. CUBE is an acronym meaning “Circle numbers. Underline important words. Box the actual question. Eliminate irrelevant information.” This simplifies abstract word problems into something more numerical and direct.

CUBE is also a very helpful method for students with attention deficits. Students who easily lose focus are most often affected during mathematics. Math frequently requires multi-tasking and switching between two or more computations, which are two excruciating tasks for those with weak attention spans. Teachers may notice these students becoming fidgety or losing their place while solving math problems. They may seem fine while solving a few problems, and then suddenly appear overly fatigued during longer exams. In addition to CUBE, these students may benefit from a systematic approach in which they write down each step prior to solving the problem.

David Wise likes to write about all things education and business. His specialty is writing about market research companies in Los Angeles. He can recite Pi to 15 places. He has two dogs.

READ MORE – Museum Demonstrates How Fun Learning Mathematics Can Be