Here, he points out five major life events that, despite what you might think, are actually great times to start a business:

#1: In the midst of the college crunch. Nothing can prepare a student better for the real world than starting and operating a business. And a college town is full of opportunities for starting a service business: tutoring, sports specialty training, babysitting services, home cleaning companies, and more. To start, you can do some of the work yourself and enlist fellow cash-strapped students to help.

“I will never forget how broke I was going through college, or all the terrible jobs I did to stay solvent,” Castrina recalls. “I wish I’d known then what I know now about entrepreneurship. Then I wouldn’t have fallen asleep in my 9 a.m. literature class because I’d been working all night in a convenience store…and I definitely wouldn’t have had to clean toilets in the gym following athletic events, a job that still gives me horrifying visions to this day!”

#2: Before you get downsized. Castrina says he’s often sought out by individuals who have just lost their jobs (often after working at the same organization for years, or even decades), asking how they can start over as business owners.

“At this point, though—after the pink slips have already been handed out—people are at their lowest,” Castrina comments. “Their self-esteem and motivation are shot, and their financial reserves are being diminished because they have no other income. That’s not a good place for a prospective business owner to be in! Instead, start your business when the downsizing rumors are just starting—or even better, when business is still good!” 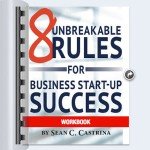 #3: Three years before your first child moves into a dorm. If you’re like many parents, you’ve been worrying about the rising cost of college tuition since your child graduated from preschool. Take a deep breath: As long as furnishing a dorm room isn’t imminent, you’ll be fine. After years of teaching others to start their own companies, Castrina says it’s very rare for a new service business not to be profiting within a year. And by year three, those businesses are normally rolling along quite well.

“For me, ‘rolling along quite well’ means earning a minimum of $3k per month, passively,” he explains. “Again, a passive business is one in which you’re in a management role, not spending your own time and money performing the service you offer. You can keep your day job while funding your child’s education on the side. After all, most states offer many great educational options for less than the $3k per month your new business will be generating!”

#4: When wedding bells are in the air. Traditionally, brides’ parents have been expected to pay for their daughters’ weddings. According to The New York Times, though, this division of expenses has largely fallen by the wayside. Both families, as well as the couple themselves, are now chipping in. So whether you have a son or a daughter headed to the altar (or will be planning a wedding for yourself!), it’s a good idea to allow a small business to foot the bill.

“Again, I’m going on the confidence that a well-run small business based on a profitable idea will bring its owner a minimum of $3k per month within a few years,” says Castrina. “That ‘special someone’ may not have entered your child’s life yet, but if he or she is ready for a relationship, why not start saving for an eventual wedding?”