How To Be Like Walt: Capturing The Disney Magic Every Day Of Your Life 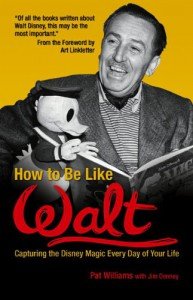 “Fantasy, if it’s really convincing, can’t become dated, for the simple reason that it represents a flight into a dimension that lies beyond the reaches of time.”
Walt Disney

These are but two of the Walt Disney-isms that pepper the pages of the latest book on the man, How To Be Like Walt: Capturing the Disney Magic Every Day of Your Life (HCI Books – $13.95 – August 2004) by Pat Williams with Jim Denney. The authors conducted over 1000 interviews to present the man behind the myth. To tie them all together, Williams and Denney share lessons they gleaned from their in-depth study of this icon of American family entertainment.

Williams, whose personal fascination with Disney began when he relocated to Orlando, Florida in 1989 to build a new NBAA basketball team, considers Walt Disney to be one of his mentors. In fact, his team, the Magic, was named in honor of one of Disney’s most famous creations, the Magic Kingdom. The name was chosen not only because the team’s proximity to Disney World, but also as a tribute to how Walt Disney’s “magical personality” touched his community.

To help readers make their own dreams come true, the authors have assembled the following lessons learned by observing Walt Disney’s extraordinary life:

How To Be Like Walt follows Disney from his humble childhood years on a farm outside of Kansas City until his death in December of 1966. What is clear throughout the book is a life of imagination, perseverance and optimism. And, although some controversy accompanied Disney’s legacy, his impact lives on in the hearts and minds of people all around the globe.

Pat Williams is senior vice president of the Orlando Magic and author of more than 30 successful books, including 4 books in the How to Be Like series.

Jim Denney is a professional writer who has collaborated with Pat Williams on several books, including How to Be Like Jesus and the upcoming Three Success Secrets of Shamgar.

1.    Walt Disney is one of the most enduring icons of the 20th century and there are already a number of books about him. What in particular made you want to undertake a project this big—to write about the life and lessons of Walt Disney?

Walt has always been an inspiration to me, but after I arrived in Orlando back in 1989, I was amazed at the obvious influence this man had on an entire community—and one he’d never even lived in! What kind of personality today has that much power? Just the thought of it made me want to know more about Walt. What was he like as a man? How was he regarded by those who knew him and worked for him? What was his imprint on people’s hearts that make them love him still? Those were the questions I wanted answered.