#Being13: Inside the Secret World of Teens

Junior high school is an emotional roller coaster – how does social media intensify it? Can tweens be addicted to their phones? How does plugging in change growing up? 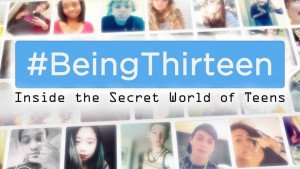 These are some of the questions that are asked in CNN’s groundbreaking investigation “#Being13: Inside the Secret World of Teens”.

For this insightful investigation, hundreds of eighth graders all over the country agreed with their parents consent to allow child development experts to follow their posts on Facebook, Instagram, and twitter over six months. They also complete in depth surveys about the impact of social media on families.

Social media is viewed by middle schoolers as a real time score board for a popularity contest that goes on 24/7?

Students admitted checking their accounts more than 100 times a day?

Social media interactions often matter more to middle schoolers that person to person conversation?  There is no line between the real world and the cyber world to tweens.

Anderson Cooper describes the project and his eye-opening interviews with families here.