The American Graduate film All the Difference by Tod Lending is a real and compelling view of two determined African-American young men, Krishaun Branch and Robert Henderson, as they journey from high school through college. It could be your story, or the story of someone you know. 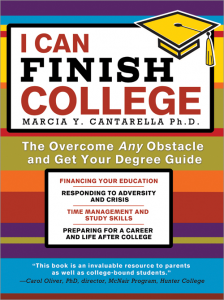 From the South Side of Chicago, they are on a mission to earn first their high school diplomas and then their college degrees. In a world in which barely half the black males in high school graduate and far fewer go to college, they are in a minority from the beginning. Young men coming from the often crime-ridden streets of south Chicago have better chances of being shot or imprisoned than they have of becoming college graduates.

In some ways the film is a bit of a cliffhanger. We root for their success from the beginning, but are uncertain how it will end. Thanks to a supportive high school (Urban Prep Academies), family members, teachers and mentors, as well as their own will, these two students are beating the odds.

All the Difference reveals critical issues confronting young African-American men by interweaving the stories of two young men who graduate from high school and go on to college. According to the Schott Foundation, the average high school graduation rate for black males in Chicago is 39 percent; half of those graduating go on to college. Urban Prep Academies, the all-male high school attended by Robert and Krishaun, remarkably graduated and sent to college 100 percent of its senior class. Both young men graduate from their respective colleges in four years.

During high school these young men were filmed in their classes, at home, and with friends in casual settings. Most of the filming was completed at school because that was where they spent the majority of their time. The filmmaker spent the next four years following Robert and Krishaun as they advanced toward their college graduations. He continued to follow them for several additional months in order to see what new hurdles and issues they encountered and what strategies, resources, and networking opportunities (how they were able to connect to people who could help them) they used to secure employment and settle into new lives. This clip will provide a sense of the film.


Along with the documentary there are online tools including a handbook for students. The goal of the College Bound Students Handbook is to highlight the obstacles that Robert and Krishaun encountered along their journeys to reach and complete college as well as the strategies they used to overcome them. In particular, it illustrates how the two young men effectively used a range of people and resources to help them achieve their dreams of a college degree. What made all the difference for them can serve as a roadmap for other students like them. The handbook can be used either while viewing the documentary or afterwards — throughout at student’s own quest to attend college, graduate, and then find a pathway to a job. It is a tool to help students succeed. There is also a Facilitators Guide which is meant to help those who work with young people to share and teach strategies that will make their pathways smoother based on the experiences of Robert and Krishaun.

The author of these materials is How to Learn expert Marcia Young Cantarella, Ph.D., who has used her years of working with students to create the All the Difference College Bound Students Handbook. Following a long corporate career, Dr. Cantarella moved into higher education as a senior administrator, dean, and vice president at schools ranging from New York University to Princeton (where she came to know Wes Moore’s sister), Metropolitan College of New York, and Hunter College. She co-directs the CUNY Black Male Initiative at Hunter College, chairs the advisory board for the all-male Eagle Academy Schools, and serves on the Board of Directors of The READ Alliance. She has combined her experience in the corporate world with her academic focus to attain a practical view of the relationship between education and work. Having worked for nearly 25 years with a vast array of students who are first-generation, low-income, and/or students of color she has written I CAN Finish College: The Overcome Any Obstacle and Get Your Degree Guide. The Guide is a highly rated practical tool to help students like these navigate to successful college completion. She is a frequent Huffington Post blogger on the college experience.

The documentary All the Difference will air on PBS starting September 12th and run for a month. However before that time those wishing to set up a screening and /or workshop on their campuses or in their programs can contact Eliza Licht, Vice President, Content Strategy & Engagement, POV American Documentary | 20 Jay Street, Suite 940, Brooklyn, NY 11201