Why Learning about Bees Is Important for Your Classroom

Why would a middle grade or upper elementary school science class be interested in honeybees?

First, about two thirds of the fruits, vegetables and nuts we eat are pollinated by honeybees. Without pollination, our meals and snacks would no longer include such foods as strawberries, blueberries, peaches, apples, grapes, carrots, cucumbers, beans, almonds, cashews, watermelons, pumpkins and of course honey, more than 300 varieties of it in the U.S. alone.

Nor would we have the beautiful gardens and parks whose trees and flowers are pollinated by honeybees.

Second: Studying honeybees means learning about some unusual and still-mysterious behaviors such as “waggle dancing” – the complicated eight-step dance that bees perform to tell other bees where to find nectar – and “clustering,” – the technique that helps bees keep themselves and their queen warm in winter. Then there are the complex ways that bees – using enzymes produced by their own bodies — turn nectar into honey for the hive and for us.

Equally important is what honeybees can teach young people about teamwork, efficiency, communication and focus — traits that are important to the classroom as well as society overall. For example, each honeybee has a specific job to do at different times in her life cycle. These jobs include feeding the baby bees, cleaning the hive, fanning the nectar, building wax comb and foraging to collect nectar and pollen. Even the queen, despite her name, is an extremely hard worker. No rest breaks for anyone during the busy season (except at night).

Given how critical honeybees are to the health of our environment, any discussion of honeybees should look at Colony Collapse Disorder (CCD), which is being extensively covered in both online and print media because of its devastating effect on the honeybee population.

CCD occurs when a large number of the worker bees in a hive (also called a colony) disappear, leaving behind a queen, food, nurse bees and baby bees. Because worker bees are the ones that collect nectar and pollen on their foraging trips, their sudden disappearance means the hive eventually collapses.

CCD, since its appearance about a decade ago, has caused enormous problems for commercial beekeepers who spend many of the warm months trucking their bees around the country and renting them out to big farmers who don’t have enough bees in their own area to pollinate their crops. For example, the almost 800,000 acres of almond crops in California are pollinated by honeybees brought there by commercial beekeepers from all over the U.S. The bees’ disappearance would obviously be a disaster for that industry.

Looking into CCD offers teachers a chance to talk about its causes: pesticides, parasites, climate change, new patterns in land use and so forth.

Moving on from CCD, a discussion of honeybees brings up the important relationship between these insects and ourselves. In addition to renting out bees, we also harvest their honey for ourselves – to eat, to sell and to use in candles, soaps, wound care and a medley of other applications.

Harvesting the honey is a fascinating process which involves a number of props and tools. The protective bee suit and veiled hat ward off attacks by hundreds or even thousands of angry bees attacking us from all sides because, after all, we are stealing the honey they have worked so hard to create for themselves. The smoker sedates the bees while we make the honey grab. The hive tool pries loose the hive frames. The brushes sweep off clinging bees. The extractor, a small device that uses centrifugal force, spins the honey and turns it into liquid.

Lastly, learning about honeybees offers students an opportunity to learn how their own actions can help preserve the dwindling honeybee population. Students who feel empowered to bring about change will most likely feel they have a stake in the environment and the many animals and insects that inhabit it – along with us.

Examples of how young people can take action to help the honeybee population:

Plant a variety of honeybee-friendly trees, flowers, crops and herbs in your gardens or anywhere else where they can thrive. Some examples: sunflowers, goldenrod and dahlias; thyme, sage and mint; maple, apple and cherry trees; alfalfa and soybean crops. Two weeds – dandelions and clover – also provide good nutrition for honeybees.

Make sure your bees always have plenty of water – in bird baths, shallow buckets and other places.

Always check out any rules or regulations in your area that pertain to honeybees and hives. Be considerate of your neighbors, especially if they are afraid of bees (but also explain to them that if they have been stung, it is most likely by an aggressive hornet or yellow jacket, not a honeybee).

Think about starting a bee project in your school, such as setting up bee hives or planting a garden. Do research reports on pollinators, focusing on how much and in what specific ways they contribute to the health of our planet. 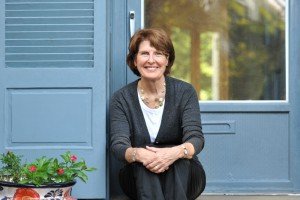 Robbie Shell is a former business journalist whose articles have appeared in numerous publications including The Wall Street Journal and Philadelphia Inquirer. She has worked and lived in New York City, Washington, D.C., Boston, and Philadelphia. Bees on the Roof, a middle-grade coming-of-age story is her first work of fiction. Connect with Shell on Facebook, Goodreads and at www.beesontheroof.com.