How to Raise Kids Who Care About STEM

How to Raise Kids Who Care About STEM

Where does the light go when the candle is blown out?

That’s just one of the questions I ask my second-grade daughter, Elyse, every morning before school. I write a single question on a note card and put the card in her backpack. That one got through. She talked about the question at dinner. She asked me about it two weeks later.

But I also told her we really don’t know the answer. Why is there darkness and light? What is darkness? What is light? We still don’t know. It was only two hundred thousand years ago that we climbed out of trees and started walking upright. We still have a lot to learn.

Now we know that stars bend light and that gravity is the curvature of space-time. Yet still, we know almost nothing. Science can’t even say what light is. Even Einstein, who knows the most about light of any member of the homo genus in the last three million years, admitted: “All the fifty years of brooding have brought me no closer to the answer to the question ‘What is light?’”

That’s why I ask Elyse hard questions, because maybe one day she’ll figure it out. Kids need to know how much we don’t know. Elyse asked me recently, “How do birds know to change direction at the same time?” I nearly teared up.

I praise her questions, because the question is a lantern. If you can ask a good question, you almost have the answer. Nature reveals itself through questions. Science is the answer to those questions. That these questions have answers that we can understand is the eternal mystery of the world. Good questions are the heart and the art of science, and the questions we don’t ask are the measure of our ignorance. 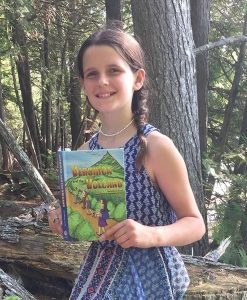 Each morning, I also write a note card to my fifth-grade daughter, Maddy. Maddy doesn’t ask too many questions, but she loves to draw. At Maddy’s school, fifth grade is the start of middle school. I remember middle school as a terrifying hell. It was supposed to be easy for me because I was leaving a private Christian school for a public school, and every private school promotes the fiction of its own superiority.

Well, guess what, if you happen to be a human being then middle school isn’t easy. It might even be objectively the worst time of life. You are hormonal and self-centered. All your classmates are cruel. You feel awkward in your own increasingly pimpled skin, and you are bullied by actual bullies, the type of people who grow up to become President of the United States. Imagine if all your coworkers were Donald Trump. That’s middle school.

On Maddy’s note card, I write a sentence, not a question. I write something about life, a line of a poem or something I’m reading. I recently wrote a line from the Irish poet John O’Donohue: “In a difficult time, you should keep something beautiful in your heart.” Maddy liked that one, because Maddy is an artist, and middle school is hard. Maddy keeps her notecards, maybe she’ll keep them forever.

No phrase is more harmful to children then “follow your passion.” Please don’t say it, and please correct the well-meaning adults who preach it. The child thinks, “gee, I don’t have a passion, I guess that’s odd.” No child needs to feel discouraged by the absence of passion. I run a publicly traded mobile app company called The Meet Group, and I wrote a children’s book about volcanoes called Veronica and the Volcano, and I wouldn’t say I have a passion for mobile apps, business, writing, or volcanoes, but other people might say I do.

But maybe your kids aren’t curious either? Try harder. Nature is full of mystery. It proves itself over and over as fantastical as any imagination: Time is relative, space is emergent and quantized, there is spooky action at a distance. The frontiers of science reveal how little we know about this universe, which could be one of countless universes. Science and math are not work constructed to terrorize schoolchildren; they are the study of nature, and nature needs little help sparking curiosity.

Einstein venerated math for its connection to nature. In 1921, he asked, “How can it be that mathematics, being after all a product of human thought … is so admirably appropriate to the objects of reality?” He struggled with this the rest of his life, and how could he not? He wrote equations that describe the very essence of space-time. He wrote an equation relating matter, energy, and the speed of light. How can math be so immaculately suited to describing nature? Einstein never figured it out. He spent his career experiencing the mysterious as beauty, and concluded in the end, “the eternal mystery of the world is its comprehensibility.”

You need merely find a topic about something in this most mysterious world we call nature that will interest your child. It need not be National Geographic magazine. Maybe it’s a book on time travel. Maybe it’s a fictional book about a volcanic adventure. Maybe it’s a book about Thomas Edison. Maybe it’s an article about why Elon Musk thinks we’re living in a computer simulation. It really doesn’t matter what it is. It matters that you look for it.

We are never too old to be read to and never too young to be curious.

If you want to get started on your own note-writing for your children’s backpacks/notebooks. Here are ten notes to get you started. I don’t give attribution in the notes, because I often paraphrase, and I don’t want the words to seem dead to the child.

Curiosity has its own reason for existing.

Why am I me and not you?

The way you look at things is the most powerful force in shaping your life.

Possibility is the great friend of the imagination.

Art is just a way of living. Deepen yourself and you will deepen your art.

Nothing resembles god as much as silence.

One of the best ways to make someone interested in you is to blush.

If you don’t like what you see, pick a new window.

It is beauty that will save us in the end. 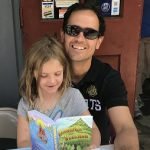 Geoffrey is also a serial entrepreneur and public company CEO. He is the CEO and co-founder of The Meet Group (NASDAQ: MEET) and previously founded EssayEdge and ResumeEdge from a Harvard dorm. He runs 5 mobile apps with 15 million monthly users, so he is always thinking of new ways to use technology to engage a global audience.