Have you ever wanted a way to feed your family healthier but did not know how to save big on organic food?

How about knowing that you could protect your family from cancer-linked pesticides, and heavy metals commonly found in non-organic foods?

Well, we wanted that too. I remember wanting the organic meats, fruits and vegetables for our family, but the high price tag stopped me.

Every once in a while I would shop at organic markets, but knew I could not do this every week. 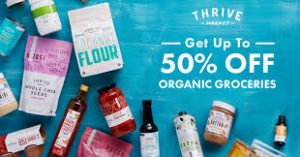 Well, finally, a new market showed up that virtually cut out the middle man and gave our family a way to eat organic every day! We partnered with them to bring you big savings on organic foods.

Not only were we able to save big on organic food, but they deliver it each week, right to our door! How is that for the best new ever?

\Well, my entire first book on the natural remedies for learning disabilities talked about the link between learning and food.

There are no pesticides, hormones or antibiotics in true organic foods. And grass fed beef give you the highest quality nutrition.

All around, organic foods are healthier in every way!

Here are just some of the science backed reasons that organic foods are better for you.

In 2017 Time Magazine reported some of the best benefits of eating organic.

As it turns out, there are fewer heavy metals and pesticides in organic foods.

Several studies in prestigious journals such as the British Journal of Nutrition shows that pesticide residues, such as from the weed-killer Roundup, which can be sprayed on wheat and vegetables, is far less likely to be in organic foods, or be detectable in urine samples from kids.T

he heavy metal cadmium, is 48% less likely to be present also.

There is a lot of evidence showing that developmental delays and ADHD may be linked to pesticide levels and heavy metals too.

Yuck! Can youiImagine having that nice container of weed killer on your counter, and spraying it on your food before you eat it?

Other links exist between pesticide residues found in urine samples and lower sperm count in men too. Well this is all bad news that gets much better when you eat organic.

2. The Pesticide Linked to Cancer is Found in Nearly Every Non-Organic Foods

Many other studies show that the pesticide linked to cancer, glyphosate, which has been used as an herbicide since the 1970s, in everything from  bread to wheat crackers, corn to honey, granola, oatmeal and more. (Weed killers such as Roundup typically contain glyphosate).

Linda Birnbaum, a toxicologist and director of the US National Institute of Environmental Health Services, said even a small exposure to pesticides can be dangerous.

Scientists with the Food and Drug Administration found glyphosate in nearly every U.S. food that is not organic.

3. No Antibiotics or Synthetic Hormones in Organic Meats

Rolf Halden, professor and director of the Biodesign Center for Environmental Security at Arizona State University says that drug residue, such as antibiotics is believed to contribute to widespread antibiotic resistance, but organic foods—which are produced without antibiotics—“are intrinsically safer in this respect.”

There is also a cancer link between synthetic hormones fed to conventional livestock to make them grow bigger and faster, but organic livestock cannot contain either the hormones nor the antibiotics.

The journal of Agricultural Food and Chemistry found that foods such as organic onions contain higher antioxidant levels than conventional onions.

Early on, some of these types of studies were debunked because they were only short term studies. The newer longer -term studies verify that organic vegetables have higher levels of antioxidants.

The bottom line here is that there more good reasons to eat organic than not. While in the past it was often too expensive, the newer markets such as Thrive or even the discounts you can get by shopping at Whole Foods on Amazon make it a much easier decision to eat organic.

The health benefits and the lower costs available give you the option. What is your best choice for your family?

Here is how to save big on organic food!

Get the coupon from Thrive here and save big on organic food!

3. Dirty Dozen List of Which Fruits and Vegetables Have Highest Pesticide Levels