How to Teach Kids About Feminism

It’s never too early to learn how to teach kids about feminism.

In BABY FEMINISTS tots lift the flap to see what Gloria Steinem, Michelle Obama, Malala and other change-making women might have looked like as babies, offering parents a way to introduce kids to their favorite feminists and the ideas they fought for.

With simple text (“Before she rose to the Supreme Court, Justice Ruth Bader Ginsburg was…a baby!”), the book shares the message that whether you’re a boy or girl, black or white, gay or straight, anyone can grow up to make the world a better place for all genders.

It’s timely and empowering, and the watercolor illustrations are delightful for kids and parents alike 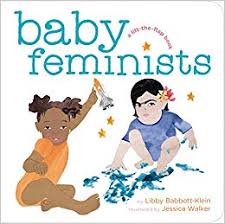 A collaboration between author Libby Babbott-Klein and illustrator Jessica Walker, both of them young mothers, BABY FEMINISTS is helpful for parents mulling how to raise kids with feminist values, especially in these retrograde political times.

How does one impart confidence and a strong sense of self-worth to kids? How do we empower girls, while also re-framing the definition of manhood for boys?

BABY FEMINISTS offers a chance for parents to explore these ideas in an age-appropriate and joyful way with the kids in their lives.

How to Teach Kids About Feminism Interview with Libby Babbott-Klein and Jessica Walker, Authors of Baby Feminists

There are so many incredible feminist icons both nationally and globally that you could have featured in BABY FEMINISTS.

Jess and I both find her to be such an inspiration, and then once Jess started illustrating her, we knew we couldn’t do the book without her.

After that we spent months researching all kinds of people. We always thought of our feminists as a team, and we knew we wanted a team that represented people who had a diverse range of accomplishments, looked different from each other, and of course — had fought tirelessly for gender equality.

We also decided that we wanted people who were relatively current, and we wanted a mix of known and lesser known figures. So we put all that together, we spent months reading articles, watching documentaries, and crowd-sourcing recommendations on social media, and this is the group we came up with.

Representing diversity was at the core of what we wanted to do with this book. One of the first things we teach young children are the colors of the rainbow.  And whether we talk to children about it or not, they see color in people.

They don’t ascribe meaning to it that adults do, but they do see it.

We hope that this will be one of the first books that children encounter in their lives.

So we hope that this book (and other books like it) set the stage for reading for our children for the rest of their lives.

We imagined this book to be for little girls AND little boys.

I’ve got a little girl; Jess has a little boy. They both love this book.

We hope to instill in all children that icons can be male and female. We also hope to begin to instill the message that it is everyone’s responsibility to fight for equality, regardless of gender.

I’ve always been aware of the different colors we use to dress boys and girls and the different types of toys we give them, but since becoming a parent, I’ve become much more aware of the way we communicate with girls — both verbally and non-verbally.

“Be careful.” This drives me crazy. What does that even mean?

It just means “be afraid” it doesn’t actually translate any information.

It just instills a general feeling that girls should not trust their own instincts and not take risks.

(As an alternative, try assessing the situation and giving specific useful advice. For instance, if a girl is at the top of a slide, rather than say “be careful”, try “hold on to the side.”

If she’s running with a stick, then say “put down that stick.” etc. )

“You look so pretty” or “what a pretty dress you are wearing.” This also makes me cringe every time I hear it.

Why are adults telling my child that what is valuable is how she looks?

Instead I try to encourage people to say “you are so smart” or “You are so funny” or (if she’s running) “you are so fast.”

Or really any other adjective that describes some intrinsic quality, or something she’s doing, not just the way she looks.

Non-verbally what I notice is that adults are much more touchy-feely with girls then they are with boys.

This greatly upsets me. We cannot expect our teenage girls (or grown-women) to feel that consent is their right, if we’ve been teaching them the exact opposite from birth.

What we need to be doing is encouraging our girls to listen to that inner voice, not teaching them to ignore it.

(To be clear, I see this with young boys too, but I notice the unsolicited prodding/hugging/kissing/poking fading as the boys look less and less like infants).

One of the major changes that I see as a result of the #MeToo era is that we are finally beginning to trust women and their stories.

What I hope this means for children’s books is that publishers will take chances on stories and authors that they might not have believed in before.

I hope that it means we will see a broader range of books published with more female characters — and more books that take risks in challenging gender stereotypes.

Children’s books can give us hope that the next generation can be different.

As children, these early books are the stories they will never forget.

They can define our children’s very sense of what a story is, what a book can be, and who are the characters that they’ve never not known.

When it comes to resistance, children’s books can shape our children’s expectations of how they expect the world to be for the rest of their lives.

Books can instill a version of the world that our children can aspire to make.

(Editor note: Read the book to find out who this famous man is).

We both felt very strongly about including men in a book about feminism.

Men and women do live together and we need to be on the same team.

However, that said, we were mostly interested in featuring women, so that’s why there’s only one man.

Author Libby Babbott-Klein is a producer and creative director with a focus on activist and political content.

She ran the video department for Al Gore’s Alliance for Climate Protection, and launched a feminist jewelry line (Libby B.K.), and for over a decade, she has been creating content that is rooted in social change and entertainment. Follow her on Twitter and Instagram @libby_bk.

llustrator Jessica Walker is a multidisciplinary artist, filmmaker, and educator. She is an assistant professor of fine arts at Parsons and has exhibited films, books, and 2D media in solo and group shows in New York, Los Angeles, San Francisco, Boston, and Australia. Her work is housed in the permanent collections at the San Francisco Museum of Modern Art Research Library, Yale University Haas Family Arts Library, and the University of Washington Art Library.